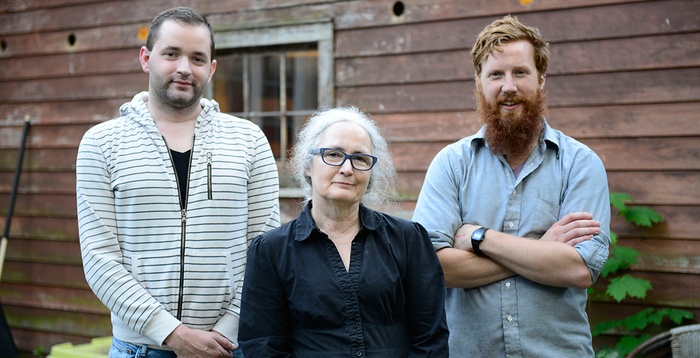 It's been just about  eight months since the death of Bill Jones, the wits and energy behind the original Virgin Wood Type. In that time we (Geri McCormick, Paul Jones, Derek Crowe, and Stumpy the Cat) - with immense help from the openness found in the larger letterpress community – have worked hard to grow the work he started into what you see here; a renewed commitment to cut alphabets out of maple trees. We are excited and eager to announce our return from hiatus.

When it came to learning the mechanics of type manufacturing, many of the trying moments we encountered came from attempting to retrace Bill's steps; finding (or not) clues in the form of notes, passwords, and files to give us insights into the thoughts behind decisions. For example, Bill had been getting the wood blanks to type-height (within .003") with the band saw. Turns out that this is an insanely, magically-difficult thing to do. As we could not begin to attempt to recreate his precision, we decided to work with a wonderful carpenter who has taken the initiative to learn about our process and can now deliver type-high wood - often within our advertised tolerances. When we needed to figure out how to change the pantograph settings, we sat down with a printed MS Excel graph that Bill had stapled to the wall and employed some good old algebra.  The equation works (most of the time), and we can adjust things by eye to satisfaction when it doesn't, so we're calling it a win. The actual cutting of type, once you get it set up, isn't overly complicated. And its shocking how much can be achieved through practice and a steady arm: a skill that comes into play during hand-trimming, the final step of production.

The original Web site was built by Bill. It was our entire storefront and Internet presence and it was hacked very soon after his death. Luckily, this had few ill effects, save rendering it a confusing, broken pile of Internet. This was strange (who hacks letterpress websites?) but it did provide us with an opportunity to restructure...well...the entire business. We worked with an area developer and friend who has built the new site with Mezzanine, an open-source CMS platform that takes advantage of the flexibility of Django. Derek drew up the design and realized the front-end by modifying an existing theme, which was merged with our e-commerce platform, Cartridge. Derek also created a new visual identity for VWT by redrawing the historic Runic and pairing it with Colfax. It's a blend of Contemporary and Victorian design that speaks to our place in each of these worlds.

We've felt consistent patience, understanding, and support and as we undertook this task. We are very glad to be back. Big thank you to our entire community, and more posts to come.