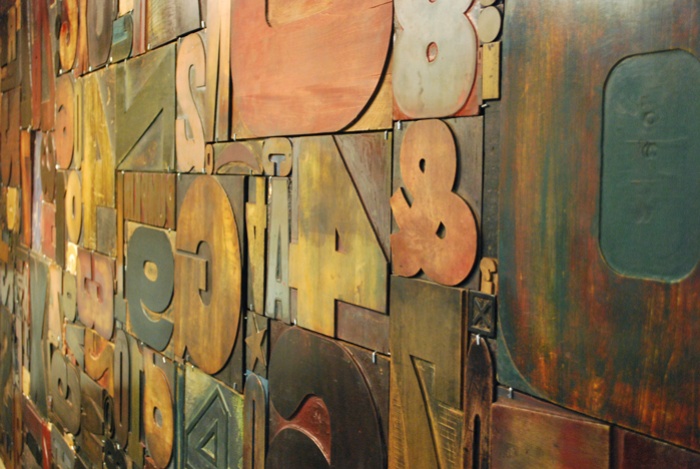 Virgin Wood Type made the trip from HQ in Rochester, New York, for the Wayzgoose at the Hamilton Wood Type and Printing Museum in Two Rivers, Wisconsin. To break up the drive, on Thursday the VWT Prius stopped in Chicago long enough for us to visit the studio of Starshaped Press. Jen Ferrell can easily be described as one of the finest true letterpress printers in the United States because her prints are produced exclusively from her expansive metal and wood type collections. The only plastic in her studio are forks and knives.

Over the summer Jen collaborated with Scott Moore of Moore Wood Type on bringing six unique snowflakes to wood. At Wayzgoose Starshaped Press debuted a glorious print announcing the snowflakes. Scott sold out of the snowflakes sets he had in Two Rivers. Collaborations like this are part and parcel of the letterpress community. 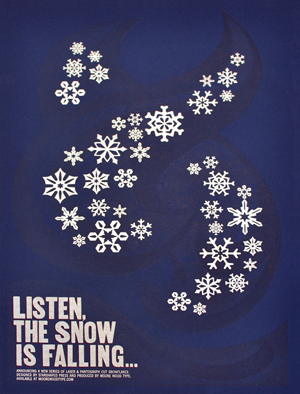 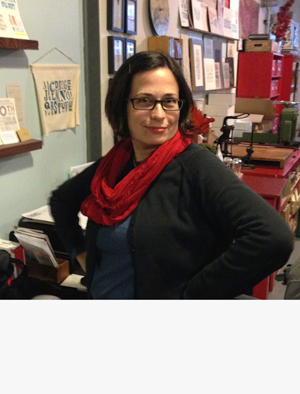 Print by Jen Ferrell of Starshaped Press using snowflake wood ornaments that she designed and Scott Moore made.

Hungry after being toured around Starshaped's factory-sized studio, Jen treated us to a most tasty lunch at Spacca Napoli Pizzeria (my mouth is watering as I write this). Anxious to get to Two Rivers, we made our way northward to the Land o' Cheese.

While waiting to check in at the Lighthouse Inn we ran into Jessica Spring of Springtide Press, Tacoma, Washington. Being travel weary and famished, we hatched a plan to eat some vittles at Kurtz's, the local German restaurant. Jessica is widely known in letterpress circles for her crazy forms. Having never met a piece of type that she hasn't wrangled into a circle or some other geometrical shape using non-traditional methods, she teaches other letterpress printers her wily ways. Toward that end, she released a new letterpress product that allows the mere mortal printer to make crazy forms. Jessica coined the term, Daredevil Typesetting, and so it's only appropriate that her new product be named Daredevil Furniture, "tools to help keep your composure." 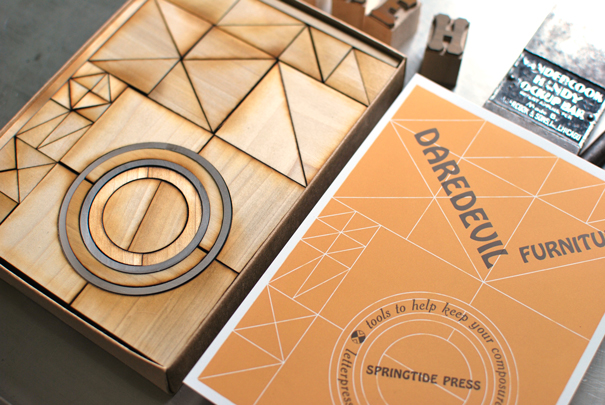 Friday morning arrived with great anticipation by the 150 or so type nerds and letterpress printers for the sixth annual Wayzgoose as it kicked off at the museum on 10th Street across from Lake Michigan. Coincidentally, Geri and Matt registered for the same workshops: David Shields's "Wood Type Identification" and Jessica Spring's "Daredevil Letterpress." David and Jessica were at the top of their respective games. For example, who would ever conceive of the idea to examine the saw marks left on the bottom of wood type? Oh, David Shields would. Fascinating. Jessica took setting type to a level not seen since the days of wrangling steer in the Wild West. To think that many items used in plumbing (e.g., toilet seal being one) can be used to set type is a thought I've never really considered. Until now.

A highlight of the weekend was David Wolske's presentation on Saturday morning, which should be no surprise to anyone who attended. In his presentation, he shared what inspired him and how he accomplished his "Isotype" letterpress printing method. The room was spellbound by his soft cadence and purposeful explanation. I dare not explain the process here for fear I will inadvertantly leave out the extreme care necessary to print wood type using a frisket approach on a cylinder press. Yes, frisket. 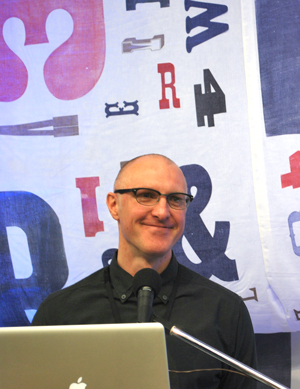 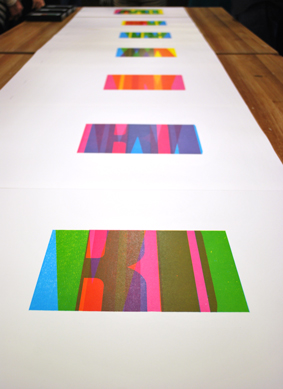 Saturday, Clint Harvey finally answered the questions burning within every non-Aussie letterpress/wood type aficionado: What is Design College Australia, and how does it relate to the Bacon Factory? Here in the United States we're rooting for our letterpress friends Down Under that they can stoke the flames of the worldwide letterpress fire into the hearts and minds of the younger Aussies through the Bacon Factory and Design College Australia. If ever there were two people who could do this, it's Clint and Tahlia McBride, printer extraordinaire at the Bacon Factory. One of her prime responsibilities is to remind Clint to print! Given their creativity, ingenuity, and energy, it's a goer (translation: something that will definitely occur) that letterpress will catch on in Australia. Ridgie didgie! (transation: it's true) (My apologies to the Aussies if my slang usage is incorrect.)

In the late afternoon on Saturday, with a bathtub full of Leinenkugels and Old Style beer, Virgin Wood Type opened its hotel door to sell wood type to the Wayzgoose attendees. Reminiscent of a college party in a dorm room, the party ebbed and flowed with revelers enjoying beer or wine while pouring over the Hell Box, ornaments, arrows, Wolske Streamers, shapes, Gothic Bold RS catchwords. Much fun was had in Room 111. Simultaneously, Moore Wood Type was selling his wares on the second floor. We wood type manufacturers are rascals. 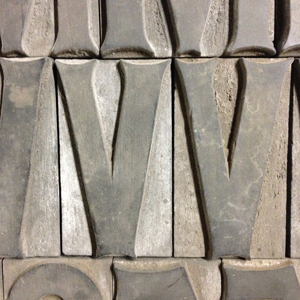 The incomparable Dave Peat and a detail of Runic Vs, which is the inspiration for VWT's logo.

Greg Walters, collector of all things letterpress and ephemera, shared his collection of paper watermarks in a fascinating talk on Sunday morning. Following Greg's talk was the annual type door prize giveaway provided generously by Mr. Dave Peat. For several years now, Dave has brought portions of his vast collection to share with attendees in a lottery-style event. If you're name is pulled from Dave's hat, you can pick one item from the table. This year, many drooled over the 45-line French Clarendon. From cuts and metal fonts to books, the tables are full of one man's amazing collection. Many a print shop has Dave Peat to thank for something from his door prize lottery.

If you've ever thought about attending a Hamilton Wayzgoose and haven't, you should attend. Find the money. Make the time. It is not to be missed.

(For those keeping track at home, it's a 13-hour drive, and, yes, we drove back straight through. Inhaling too much maple dust has clouded our reasoning.)