One Year After Our Re-Launch (or What We've Learned) 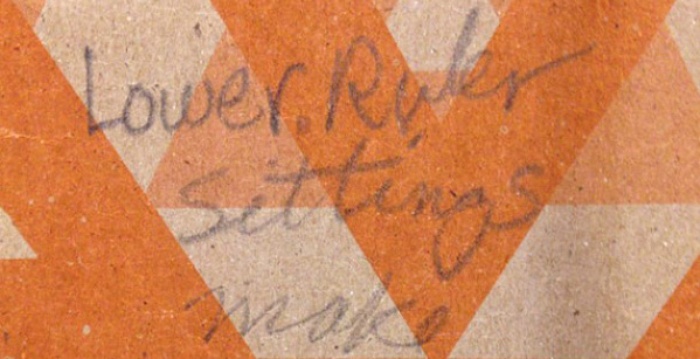 We’re celebrating our one-year anniversary of re-launching Virgin Wood Type this month, and we’ve learned a lot to improve our products.

Our co-founder, Bill Jones, was still learning the many nuances of manufacturing wood type when he fell ill in 2012. Because orders had come in during his illness, he coached Geri, wife and co-founder, on how to cut type using the pantograph. Shortly before Bill passed, Geri asked Derek Crowe to help her carry on what Bill had started. Together, Geri and Derek pieced together what needed to be done to fulfill orders and take new ones.

One would think that making something that was made 120 years ago would be incredibly simple nowadays because of advances in just about everything. Not true. Using his trusty table saw, Bill cut the end-grain maple to type high by himself. After having been an amatuer woodworker since high school, Bill knew his way around the table saw and other machines that can mangle a limb in a heartbeat. As it turns out, cutting end-grain maple into type high tolerances is quite tricky. One of the first tasks was to figure out how we would get type high maple. Derek found a local cabinetmaker who was willing to solve this riddle. Although the cabinetmaker has the machinery and skill, he struggled to nail down type high on a consistent basis. Going back and forth with him has gotten us to the point where we are now getting maple blanks that are within those tight tolerances of type high.

Our pantograph was completely custom-built sometime in the 20th century for American Wood Type. That’s about all we know about it. There weren’t any manuals. There wasn’t a retired gentleman who had used it for 40 years and was eager to show us how best to use it. Nothing. Bill sat at the pantograph from morning until night fiddling with it until he understood the basics. For example, written on the front of a small letterpress notebook Bill wrote, “Lower ruler settings make smaller type.” This likely was a light bulb moment, and he wrote it down, not IN the notebook but ON the cover of the notebook.

Using the pantograph requires patience and skill. Neither attribute is in abundant supply at the beginning of learning how to use it. The high-speed rotation causes the cutter (or bit) to fight the wood grain at times, so there’s a certain path one must take the cutter with every character; however, with some characters it’s important to abandon the that familiar path of following the pattern for a different approach of cutting out waste before even attempting to cut the letter’s edge. This is something you learn by examining a character after you finish cutting it and notice its flaws. “Why did that happen? Now I have to make another letter.”  None of this is written in any book or on a blog.

Only recently have we abandoned what had been a long-time approach in our wood cutting. As with almost everything one develops a routine. Our routine had been to follow the pattern counter-clockwise first and then double-back around the pattern clockwise. Well, a couple months back we noticed that the edges are crisper by only going around counter-clockwise.

Another improvement has been to clear the wood voids before following the pattern. We would muscle through the uncut wood to follow the pattern; however, we noticed that sometimes the cutter would be fighting the grain of the wood and causing the cutter to want to run away from the pattern. Voila! Clean out the excess wood and the cutter follows the pattern like a hot knife through butter. Oh yeah.

One might think that after cutting the letterform in maple, that character is finished. We’ve found that taking a small file to the side walls of the character removes little “cuticles” of maple. Filing can also straighten an otherwise slightly jagged edge. 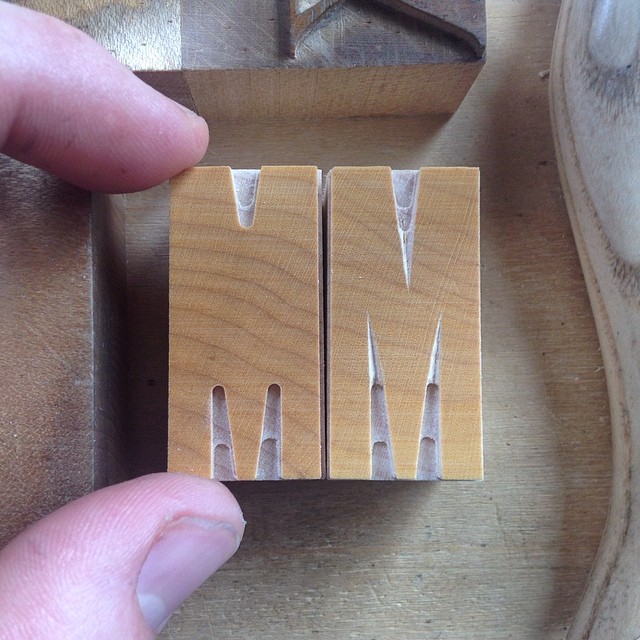 After filing, the wood type moves into hand trimming. Derek’s skill has become an art form over the past year. He’s been able to deftly carve the deep crotches and apexes of the cap A, N, M, V, and W with traditional wood carving tools. We’ll be experimenting soon with punches that Scott Moore of Moore Wood Type graciously taught us at the 2014 APA Wayzgoose at Hamilton Wood Type & Printing Museum. 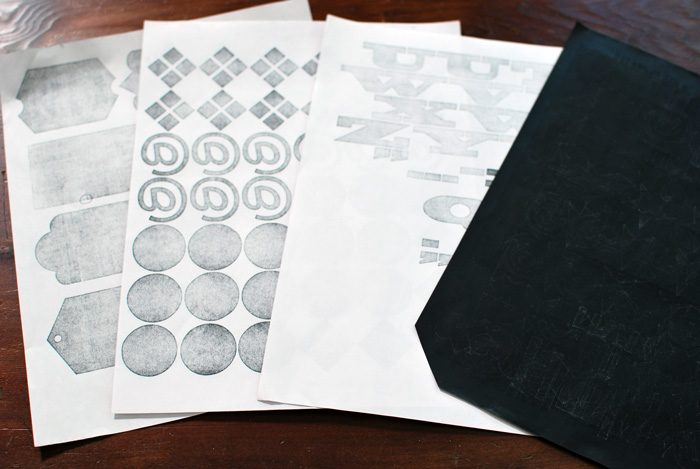 Before shipping anything, we proof it on a Vandercook 3. Wait. Proof it? It’s supposed to be virgin, not spoiled by ink. We’re way ahead of you. A product once used all the time with the typewriter is again an important tool. By putting a piece of carbon paper between clean sheets of paper, we can “print” your type without deflowering it. (I’m blushing here.)

We’re looking for areas of the wood that might not be type high, hard-to-see dings on the surface, hand trimming that could be improved, and any other anomaly. Let me tell you. Nothing gets past eagle eye Geri.

Presentation of the finished product is as important to us as the wood type itself. We’ve started to create designs in our shipping box, when possible, with the arrows, streamers, shapes, and/or ornaments. Sam, Geri’s son, is chief box maker and box stuffer.

We’re all pleased with how far our wood type has come over the past year, but every day we learn something new and have been improving our manufacturing process accordingly. Imagine where we’ll be a year from now.